Is there time and energy to enhance quality?

COLUMN. After many years of successful research combined with leadership positions at the university, professor Hans Ellergren will, at least temporary, leave his Alma Mater. Next year, he will take up the position as Secretary General of the Royal Swedish Academy of Sciences. 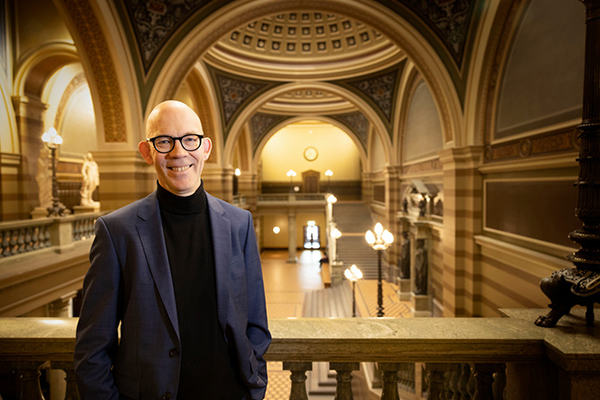 Columnist Hans Ellegren writes that the University should make better use of meeting places for sharing experiences, in order to highlight both good examples and what is difficult. Photo: Mikael Wallerstedt.

One of our former doctoral students used to end his seminars with a somewhat amusing picture, taken during a playful break from his studies. It was captioned: Swedish taxpayers pay me for this!

The tone was jocular but there was an insightful undertone. Despite coming from one of the richest countries in the West, in his Swedish doctoral studentship he saw a privilege that he needed to live up to – a manifestation of prosperity.

Having the opportunity to research and teach at a university is not a human right. For those of us who are nevertheless given this privilege, it is not either something that we feel obliged to bow and scrape to. But there is reason for the sector to reflect on whether the tax money that funds our salaries is being used to best effect. How can we translate a given amount of government funding into activities that best benefit society and satisfy our quest for new knowledge?

(1) Politicians increasingly want to target direct government funding to specific areas. This often meets with resistance from the higher education sector and many of us try to argue in favour of freedom of research in various ways. But it is difficult to win this argument. There is a widespread belief among politicians that you can order solutions to current societal challenges simply by suddenly channelling funds in a certain direction. Here we have an educational challenge to explain how knowledge is acquired.

There are many good reasons to make higher education accessible throughout the country. In collaboration with regional businesses and government agencies, the university colleges around Sweden play an important role for the labour market. However, this does not necessarily mean that research should be carried out everywhere. In fact, the link to research that is often sought after in education can be more easily achieved through increased collaboration between universities and university colleges.

As for the work within the University, one observation is that a bureaucratic culture is creeping in more and more. We are being integrated into an audit and control system that is widespread in the community. Much of this is driven by political decisions, but sometimes you get the impression that we ourselves get just as carried away, creating internal systems and administrative structures that are really not absolutely necessary. We are so keen not to make mistakes. What might be needed is more courage to do the right thing!

We have developed a leadership and a line organisation that meet the requirements of exercising public authority, reporting, budget processes, strategic plans, evaluations, risk assessments, regulations, third stream activity, health and safety work, continuing professional development, teacher education, fancy presentations... All good as far as that goes, but is there time and energy left over for a leadership that focuses more directly on enhancing the quality of our research and education?

What we might call academic leadership should have taking responsibility for core activities as its starting point. Working actively at all levels of management to create good conditions for others. Taking a step back to see where we stand: is there anything we can improve?

This might concern recruitment and resources for those we recruit or being able to prioritise (however difficult that usually is!). It might involve taking responsibility and providing support when an activity faces particular challenges. It might be about concrete things like encouraging all the things that are characteristic of a good research environment: a seminar culture, international exchanges, academic debate, innovation, feedback, job satisfaction and, not least, the actual work of gender equality beyond plans and groups.

One concept that we probably use far too little is forums for sharing experience: forums in which good examples are highlighted and presented. For example, if you are a Dean, get your heads of department together a few times next semester and have each of them talk about a few things that are working particularly well in their departments, things that others could emulate. And on other occasions, highlight things that are difficult.

But now Christmas is drawing near and it’s time to relax. We can certainly start the holidays with a sense of pride in our University. We can feel proud that we have carried the baton that generation after generation have carried in the past. And when the 546th year of the University gets under way, perhaps it might be a good idea to spare a thought for our core activities!