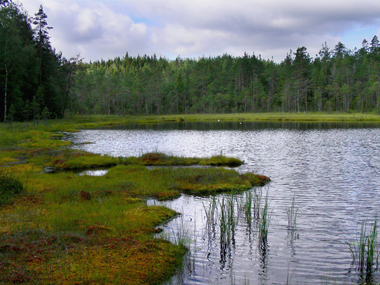 Microorganisms are the most abundant organisms on Earth and they are key players in carbon and nutrient cycling. We know, however, very little about which microorganisms occur in aquatic environments, their spatial and temporal distribution patterns and their functional capabilities and overall importance for the maintenance of ecosystem functioning. We address these shortcomings by research along two major lines of research:

The role of microbial diversity in ecosystems

Microorganisms are important players in carbon and nutrient cycles and their activities affect ecosystem services such as the release of greenhouse gases and the abundance of other organisms in the ecosystems. Understanding how microbial community composition and diversity are related to the magnitude and stability of ecosystem services is therefore a central question that we investigate in several projects. For instance, we investigate how disturbances and gradual environmental change affect microbial diversity, community assembly mechanisms and their relationship to the magnitude and stability of ecosystem functions in space and time. Ecosystem functions of interest are for instance carbon degradation and primary productivity.

We study both prokaryote and eukaryote microorganisms. Several of our project have also an applied focus. For example, we study the causes and consequences of algal blooms for greenhouse gas emissions from brown water lakes, and the role of parasites for termination of algal blooms.

The composition and diversity of microbial communities varies in space, and the question is why? In several projects we have a metacommunity perspective focusing on understanding the mechanisms by which communities assemble, including local environmental conditions, dispersal as well as historical and stochastic factors such as priority effects and drift. We primarily study lakes, but other aquatic and terrestrial environments are also of interest.

We are also interested in temporal patterns and carry out studies on long and short-term temporal community dynamics, for example in the well-studied Lake Erken, but also in experimental laboratory systems and other marine and freshwater sites.