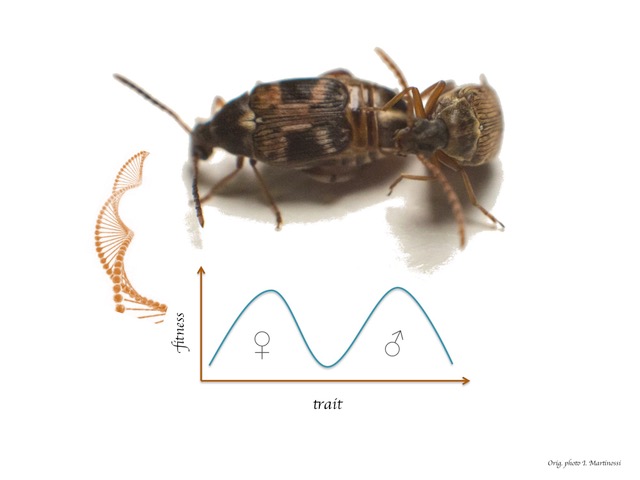 Females and males often have different paths to successful reproduction, which has led evolution to produce some of the most beautiful and bizarre forms of within-species polymorphism, such as the blazing courtship displays of male birds of paradise or the mighty tail of a male peacock. Sexual selection on males drives the evolution of these examples, but sexual and natural selection also operate in ways unique to females.

How sexual dimorphism evolves is not only a question of what kinds of sources of selection act on the sexes and why is the process often specific to each sex, but also a mechanistic problem: males and females share all but a handful of genes. An added layer of complexity arises from the fact that phenotypes determining organismal fitness are often genetically integrated with one another – and often in sex-specific ways.

My work seeks to improve our understanding of what does it take to evolve sexual dimorphism in integrated phenotypes in the face of such genetic constraints, and what consequences does the process have on gene evolution. My lab addresses the topic with the help of seed beetles, using experimental and genomic tools.